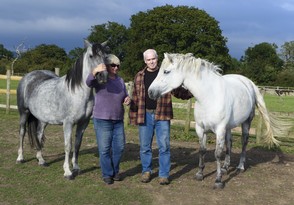 Swallow Beck CL is situated in Westhampnett, at Lanburn Connemara Stud. Run by Pam & Paul Clingan. Just 2 minutes from Goodwood Estate and situated perfectly for Chichester City Centre amenities, excellent restaurants and attractions. Our site offers great views of aircraft, particularly runway 14/32.
We have a multitude of birds including Egyptian Geese, Skylarks, Finches, Swallows, House Martins, Long-tail Tits, Waxwings, Nightingales, Kestrels, Buzzards, Wrens Dunnocks, Goldfinches, Wagtails, Doves, Woodpeckers. A veritable feast for Bird Watchers.
Recent CL News:
29 July 2021
UPDATE
* LPA decision due soon!!
**********************
Planning Permission
Our Business Plan was approved by an Inspector/LPA in August 2019 for a Caravan Site which is necessary to finance our Champion Connemara Pony Stud.
Despite what SHOULD have been permitted, the application has had to go through the full planning process.  This started in February 2021. They know we are leaching money hand over fist, but still it goes on.
Lanburn Connemara Stud Est. 1971 - Celebrating its 50th Anniversary

The Stud was established by Pam's parents, Bob and Margaret Blackburn, in 1971 when they bought their foundation mare and first Connemara pony for Pam to ride from Moycullen, Connemara, Ireland. On inheriting the Stud when Bob died suddenly in 2014, the usual workings of the Stud were thrown into disarray. For seven years, Pam & Paul have battled with the Local Planning Authority in order to get Planning consent to save the stud.  Finally, in 2019, five years later, they were successful. If you would like to read more about the Connemara Ponies at Lanburn Stud please go to LanburnConnemaras.co.uk
Stud News 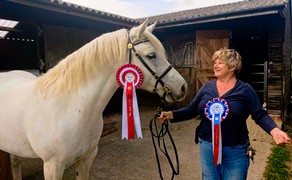 We are delighted to announce the arrival of Lanburn Lionheart, born 13 June 2021.  Glencarrig Dolly has been scanned in foal for 2022.
Dolly did exceptionally well in virtual shows during 2020. Our old mare, Lanburn Lismore, last of my parents' bloodline, failed to take by AI and has now gone to stud in Monmouth for a last attempt to get her in foal.

As part of the agreed Business Plan with the LPA, we need to prove we are legitimate (despite us having been here since 1967 and the Stud established in 1971) and increase our breeding stock. We have been very lucky to purchase a mare with a very rare bloodline as part of our agreed breeding programme. Rosie is presently staying with friends at Cashel Bay Stud in Ireland to be covered, she will then travel to us here.
HISTORIC FACT: Rosie's Irish name 'Dún an Óir Rosalind' means 'Fort of Gold' which is a place on the Dingle Peninsula in Co. Kerry named, after a ship of iron pyrite (Fool's Gold) went down off the coast. Here a historic battle took place in 1580 when Pope Gregory sent Italian, Spanish and Irish men to fight the English and many heads literally, rolled. Sir Walter Raleigh was said to have lead the assault and some 30 years later after his fall from favour, was executed for his involvement.
'Go Fund Me' Fundraiser Campaign
We have re-started a GO FUND ME Fundraiser Campaign to help raise funds for an Elsan Cesspit Tank.
Caravan & Motorhome Club Members - For those of you who donate to the GoFundMe campaign we are offering one FREE night when you book.
Working Towards Our Vision
Our site will be a Luxury Site. We have been ear-marked as a 'Flagship Site' by the CAMC and this is what we will be working towards. But as mentioned above, due to the wrangling with the LPA, we now have to start small and basic. We really hope our visitors will understand and be patient with us.
We have a Plan and a Vision.
Pam & Paul